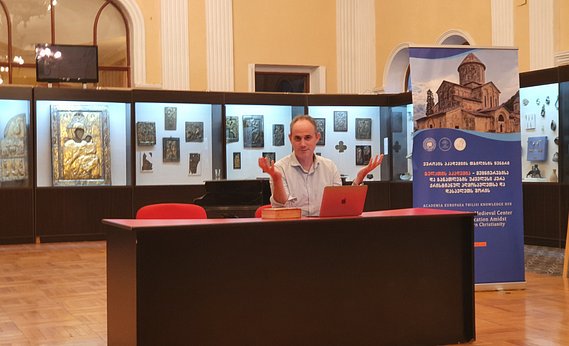 Gelati Academy was founded in 1106 near the Gelati Monastery (village of Gelati, western Georgia) on the initiative and support of the great Georgian king, Davit the Builder. This was a large-scale idea that brought together in Georgia the intellectual forces operating in the various cultural centers of the Byzantine Empire and the Christian East at that time. Gelati Academy became one of the most important theological-scientific and educational centers of the Christian East of its time, this Center was tightly connected with the religious-cultural direction and political orientation of Georgia for the next two centuries. Consequently, Gelati can be considered as a symbol of Georgian national culture, an important element in the formation of Georgian national identity, which was an organic part of the great Ecumene.

The first day of the event was dedicated to Gelati Academy. Under the guidance of academician Zaza Skhirtladze, the participants visited the Gelati monastic complex. Later, Professor Levan Gigineishvili delievered a lecture about the Gelati Academy at the Kutaisi State Historical Museum. The lecture was about the significance of Gelati Academy as one of the best, courageous and progressive theological-scientific and educational centers of its time of the Christian East and its role in the formation and development of the early European Renaissance. Levan Gigineishvili also spoke about Ioane Petritsi's attempt to combine philosophical and biblical traditions, which was a very interesting and at the same time, audacious project for this period.

After the lecture, the meeting participants discussed ways to protect the spiritual and material heritage of Gelati and present it in the European academic space.

On the second day of the meeting, events were held in the Archaeological Museum of Vani. In the first half of the day the session of the Scientific Advisory Board of Tbilisi Knowledge Hub was conducted. The participants discussed the current projects and future plans of the Tbilisi Knowledge Hub. The members of the Scientific Advisory Board put forward several project ideas: a) under the leadership of Prof. Kate Tchanturia - the possibility of preparing an application for an ERC Advanced grant and presenting a young researcher for an ERC Starting grant was highlighted; b) At the initiative of Prof. Zaza Skhirtladze, it was planned to participate in the COST Action with the project "Sacred paintings and ways of spreading Christian doctrine (Eastern Europe, Georgia)".

After the SAB meeting, the participants, led by academician David Lortkipanidze, visited the exhibition of the Vani Archaeological Museum. After the excursion, academician David Lortkifanidze gave a lecture on how modern technologies and installations can be used in the study of cultural heritage monuments, using the unique exhibits of the Vani Archeological Site as an example. He also spoke about the Vani Archaeological Museum, which is one of the first museums in the Caucasus region and has a rich cultural heritage. After that, the participants discussed the issues raised in the lecture.

On October 4-5, 2022, the AE Tbilisi Knowledge Hub together with Tbilisi State University IJ, held an extended session of the Scientific Advisory Board in Gelati, Kutaisi and Vani. The meeting was attended by members of the Scientific Advisory Board and the project initiative group of the Gelati Academy. Amongst participants were Honorary President of Academia Europaea Sierd Cloetingh and former Vice-President of the European Research Council Eva Kondorosi.